The delay was to allow me to finish off two squadrons this month and bring you the first half of:

In May 1635, Timoléon de Sercourt d’Esclainvilliers' company of light horse was integrated into Cardinal Duc régiment, fighting as part of that unit at the Battle of Rocroi (1643).

Around the same time the unit was retitled régiment d'Esclainvilliers and then, c.1656, régiment Commissaire général cavalerie. After nearly half a century of service – mostly in Flanders – the regiment became 3e régiment de cavalerie in 179, fighting at Valmy and Marengo, before becoming 3e régiment de cuirassiers c.1802. 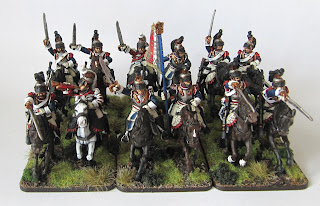 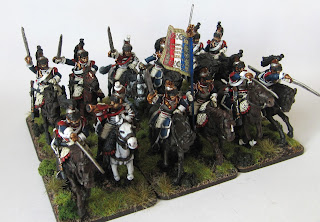 Serving France through the Franco-Prussian, First and Second World Wars, as well as in Algeria, the regiment was finally disbanded in 1998 as part of the general reorganization of the French Army that followed the end of conscription. 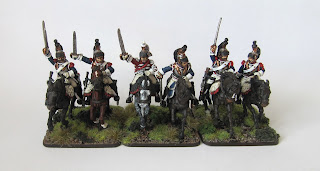 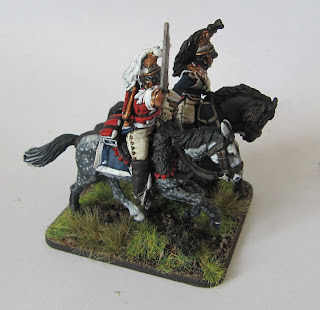 So, aside from collar colour, the easy way to distinguish these boys from 2e régiment de cuirassiers is in the colour of the musicians' sheepskins, which are the more traditional black.
Posted by Stephen at 16:14